In 1850, the City's population stood at about the present level - close to 10,000 resident inhabitants. The population dipped down to somewhere around 8,000, before climbing back up to levels not seen in 150 years.

Over this time, due to building works and population movement, the historical memory of local city governance was lost.

Here in Portsoken, and across the City, local municipal democracy disappeared almost in its entirety, legislated out of existence by various Acts of Common Council. The local wardmote council met, but only as an election court and debating forum, all its other functions as a local municipal body had become dormant.

The last record I have of a committee appointed by a Court of Wardmote for local municipal purposes, is 1859. 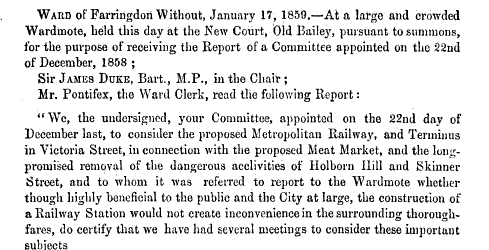 In Portsoken, no wardmote resolutions had been put for over 150 years, when I first appeared at a wardmote in 2000, armed with some resolutions related to matters affecting the Guinness Estate. Neither the Alderman or Ward Clerk were sure of how to proceed.

Since that date, this dormant aspect of our local municipal government has been revived - not only in our wardmote, but at other wardmotes across the City of London.

The next step to take, in my view, is to revive the formation of local precinct committees of inhabitant householders, which have also become dormant.

Only three of the precincts in the ward still retain inhabitants:
Tower Hill Precinct - where the Mansell Street Estate and Marlyn Lodge are located.
Barrs Precinct - the area south of Aldgate High Street and north of Little Somerset Street,where there are a number of private flats.
Covent Garden Precinct - where Middlesex Street Estate is located.

What could a local precinct committee do?

What is needed:
1. Annual scrutiny of the Ward List by a wardmote committee, to ensure it is up to date, and that as many people as possible have the right to vote, who are eligible.
2. To look into nuisances and annoyances in each precinct, and report on these to Common Council, or request the Common Councilmen to act on them.
3. To scrutinise the work of the Common Councilmen and hold them to account.
4. To look carefully at Common Council agendas and minutes, so that the residents of the ward can take a proactive approach to their government, and not a reactive one.
5. To work for better local policing.

Who can vote on wardmote resolutions, or sit on wardmote committees?
While it is clear that anyone who is on the Ward List and a Freeman can stand for election to Common Council at wardmote, it is not as clear that these same people have the right to propose motions at wardmote, or vote on them: the wardmote is a meeting of the resident householders of the ward. Legislation governing the electoral franchise, to my knowledge, does not, and has not, reframed the terms of function of the wardmote as a branch of the municipal government of the City of London for the resident inhabitants of the ward.

Anyone can attend a wardmote nowadays, even non-residents of the ward. In the past, this was forbidden by law and custom.

I am not convinced, however,  that any non-resident, even if they are a Common Councilman with their name on the Ward List, has the right to propose a motion in the wardmote, or vote on it. I am of the opinion that this right is reserved for resident inhabitants. This matter will need clarification from the Town Clerk.


Posted by Latinum Institute at 13:50